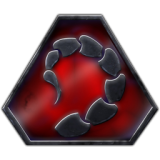 You really think this is appropriate? Not to mention that this is your first post and you've also bumped close to a 4 year old topic. This behavior is not welcome here. I'll keep your post up just