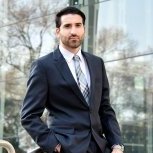 Is this not what Bryan is doing here?  I've played him and all he's done is acted like a disrespectful bratty kid, no matter if he wins or loses.  At least he's smart enough not the post those